The Cards and their Alternate Uses

By now, if you are interested in Gamma World, you must have heard about the cards the game uses. There has been a lot of talk about them during the past few weeks on various gaming message boards: some people welcome them as added value to the game aspect of Gamma World (I am one of them); others think that cards shouldn’t have a place in a tabletop role playing game, or that having booster packs as part of its marketing strategy is anathema to the very idea of a role playing game. I can’t blame them, remembering our worries not so long ago when Wizards of the Coast acquired TSR, and surely won’t be able to change their minds. I won’t even try to get into the debate of whether or not the use of cards or the presence of booster packs to build your own decks is a good or bad thing here.

What I can do, however, is explain what the game’s default use for these cards is supposed to be, hopefully dissipate some of the myths and misunderstandings that have been propagated about it, and how, from there, their use can be tweaked or completely discarded to suit your own game table’s needs. Let’s give it a shot. 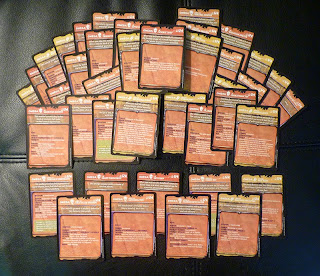 Either the players have their own Alpha/Omega decks, or they don’t. If they have their own, in some circumstances they can make a die roll to determine which deck, their own or the GM’s, they draw this or that card from. If they don’t have their own decks, they always draw from the GM’s deck.

As a GM, you might play your entire campaign, or campaigns, only using the 80 cards included with the boxed set. So by default, nobody needs the booster packs, at all, since they only represent some added value if, as a GM or player, you want to build your own specific deck for your game or character. It’s a possibility, and it might be fun, but it is certainly, emphatically not a requirement. 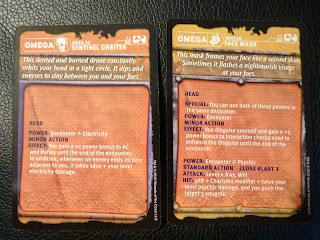 Sample Omega Tech
Alpha Mutation cards are drawn whenever you start an encounter or roll a 1 on a d20, the latter being called an Alpha Flux in the game’s jargon. You discard them after use, or whenever an encounter ends. Alpha Mutation cards simulate some spontaneous changes in your character’s appearance and abilities. You could be surrounded by a force field absorbing the kinetic force of incoming attacks, or grow patches of beetle carapace, see your reflexes temporarily augmented, and more.

Omega Tech cards are drawn whenever you find caches of such items in the game. You roll a die, and according to the result, you either draw from your own deck or the GM’s. If you don’t have a deck of your own, you always draw from the GM’s. These simulate some wonky items from the Ancients you can use with the risk of depleting their power source, which would render them unusable in the future (discarding it for good). Examples include Force pikes, Envirogloves protecting your hands from any type of environment or Animatronic Toy Bears that could restrain your enemies or tell you some bed-time stories, should you need them.

The thing is, you can use these cards in any number of ways. You could either have the cards come up into play in variant situations, or just use them as equipment and power cards, never drawing from a deck, or even not use the cards at all. Consider the uses presented in the rulebook as default variants, not inviolable rules, and whole worlds of possibilities suddenly will open to your imagination.

Let’s take the Alpha Mutation cards as an example. With the game as written, you draw one card (or more, if you’re 4th or higher level) at the beginning of each encounter, or when you are victim of an Alpha Flux (discarding one of your cards and drawing a new one instantaneously). Now, nothing stops you from house-ruling the moments when you draw cards. 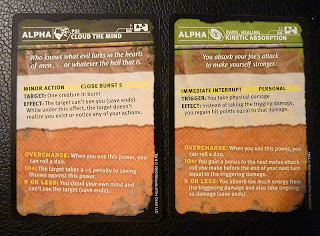 Sample Alpha Mutations
Mutagen Zones: you could instead have players draw cards when they come in contact with a Mutagen or Unstable Zone which would be an area that spawns mutations on the characters’ parts. These could even work like traps with triggers and attacks against some of the players’ defences. Or they could work only if the character mentally surrenders to its Flux effect. They could trigger specific mutations you selected for the Zone, or you could have the players draw cards from the deck, or a selection of cards you made prior to the game, however you want to.

Hulk Angry: or you could watch the players’ role playing of their characters and either have them draw an Alpha Mutation when they are getting angry, or express specific emotions that you think could trigger mutations. You could have them make a saving throw. If they roll 10 or more on a d20, they resist the reality shift. If they roll less than 10, they mutate. Or maybe they could just surrender to the effect and mutate automatically. Or be victims of mutations without any roll being made in the process. You could hand out a specific card to the player, or have them draw from the deck, or a specific selection of cards you prepared before hand.

Reality Storms: A throwback to the good old TORG role playing game, you could have weather effects which trigger mutations on the characters’ part. If they venture outside through the storm, their bodies react to the environment, adapt, and mutate. Hand out a card or make the player draw one. Alternately, you could have some Reality Mists, which would be similar to the Mutagen Zones and trigger the mutations.

Mutagen Agents: Some specific items could trigger mutations: maybe some potions, hypodermic syringes or trinkets, maybe with a number of charges each, and horrible side effects if a save is failed when you use them. Some specific type of concoctions could trigger some specific mutations, or you could have the players draw cards from a deck.

These are just a few ideas off the top of my head. Hopefully they will inspire you to come up with your own uses for your campaign.

Omega Tech cards are even easier to manage. You could just hand out cards as equipment to the players whenever they defeat a specific enemy, or just not use the cards at all, instead using the cards descriptions as special items in your game no different from magic items in a standard D&D game. 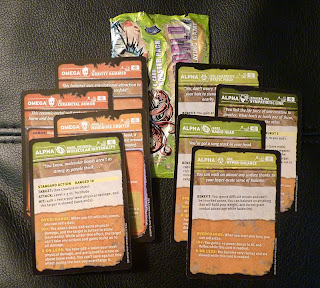 A Gamma World booster pack
Let's not forget there is always the possibility for you to build your own cards as well. Have a look at these fantastic card templates on the WotC Community. It shouldn’t be too hard from there to come up with your own fancy Alpha Mutations and weird Omega Tech!

And these are just for starters. My point is that these cards just add to the game dimension of Gamma World. They are not needed, or could be used in any number of ways of your choosing. The only limit here is your own imagination. Make the game your own. Tweak it to your and your players’ own personal needs, and you’ll get the specific experience you want out of it without ever drawing a card from a deck, or building a custom deck out of booster packs, if you so choose.
Posted by Benoist at 12:57 PM

Benoist
Frenchman living on the Central Coast of British Columbia, I spent my childhood between Lorraine, Normandy and the French Ardennes. I am a game-designer, developer and cartographer with Ernest G. Gygax Jr. at GP Adventures LLC. 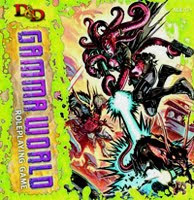